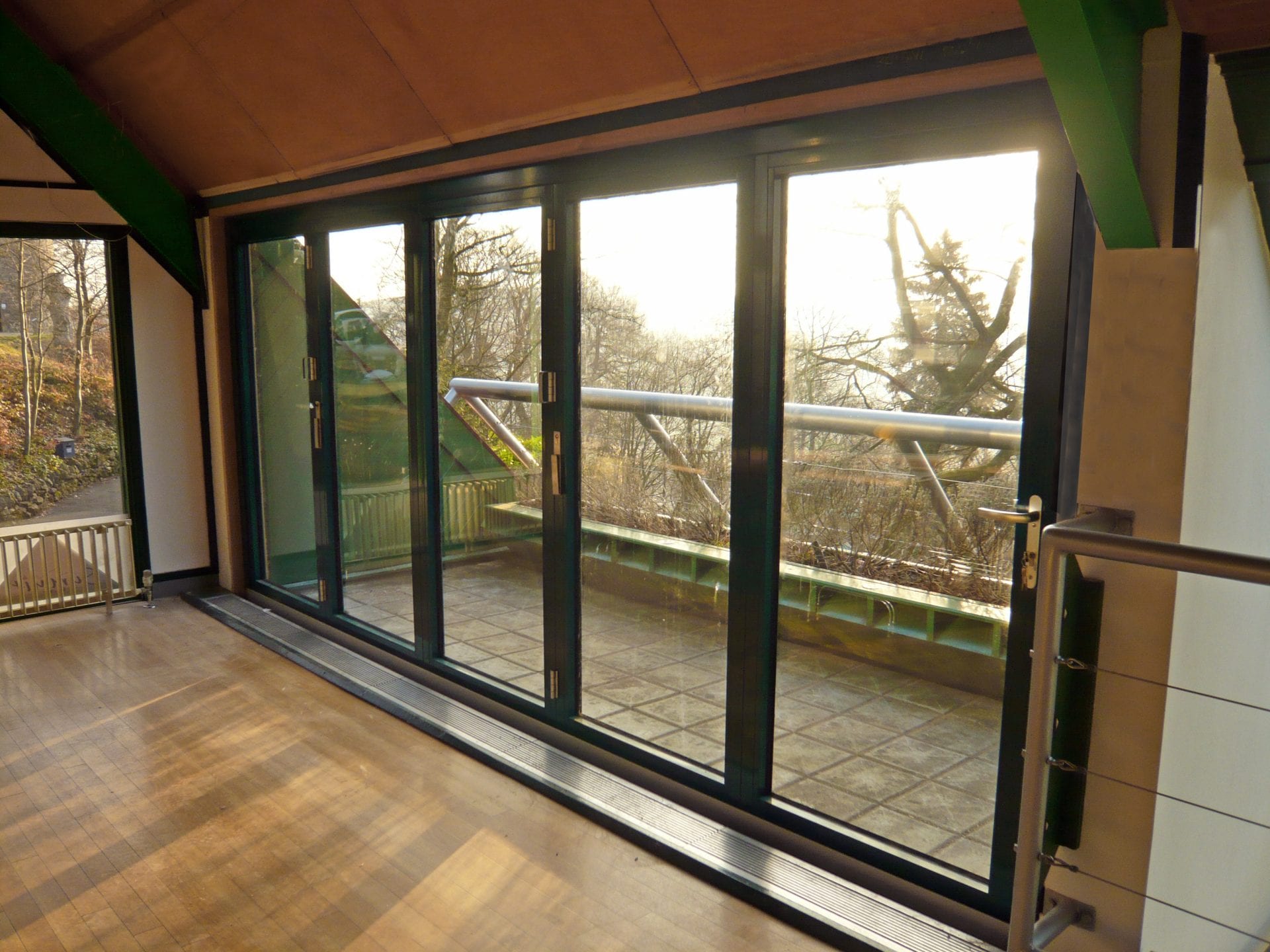 The Heights of Abraham (http://www.heightsofabraham.com/) is a major tourist attraction in Matlock Bath, Derbyshire. It consists of a hilltop park on Masson Hill, accessed by a state-of-the-art gondola cable car from the village. Amongst the attractions in the park, which has been open since Victorian times, are caverns and lead mine tours, adventure playgrounds, exhibitions etc. providing a great day out for all the family.

The visitor centre, Treetops, has a commanding position on the hill-top, with views down the Derwent valley and over Matlock Bath; but while this gives diners a beautiful setting, it also means that the doors on the front elevation are heavily exposed to the elements. The existing sliding, folding doors were beginning to look worn and old, and were becoming difficult to open. This is when owners, Andrew and Rupert Pugh, both of whom are past Gowercroft customers, contacted us to discuss the options.

The initial discussion, in Autumn 2010, was based around replacing the seven existing timber sliding, folding doors with new timber doors on bottom running Centor ironmongery, but the concern remained around the exceptional level of exposure and the possibility of damage from the high levels of footfall. The project went on the back-burner through the summer season. In the meantime, we had been contacted by Centor, who were selecting excellent joinery companies to become registered suppliers for their new C1, Centor Aluminium Bifolds. When discussions began again in late summer 2011 Steve Keeling at Total Image, (http://www.totalimage.co.uk) who act as design consultants for the client, also became involved. He recommended that an aluminium system would be the answer and it was immediately clear that Centor C1 would be an excellent option.

Key features of the range include:

Once the decision had been made to use the Centor Aluminium Bifolds system for all seven sets of the doors, David Brown, Gowercroft Joinery’s Installation Director, worked closely with and the customer and Total Image. Steve’s design practice was able to provide dimensionally accurate 3D visualisations of how the new doors would look and operate. The visuals also provided an opportunity to ‘test’ options to resolve issues around the storm cill that features on the system. Due to the doors sitting directly onto steel RSJs, it was impossible to lower them and we had to ensure that the thresholds met accessibility regulations. After much consideration and input from all parties, it was decided that the heating grills, directly behind the doors, would be raised slightly to give a solid step.

Steve Keeling said of the project, “Gowercroft worked with us to deliver a solution that was both functional and an excellent match for the overall appearance of the building.”

The doors were installed in April 2012 and are already a big hit with visitors, providing easy access, clear unimpeded views and high energy efficiency. Gowercroft has completed two further small projects at the Heights on the back of this project and we hope to continue working together in the future.

Rupert Pugh said “Treetops has been returned to its former glory and I look forward to working with David and the Gowercroft team again in the future.”

If you are interested in the Centor C1 system, or want to discuss the pros and cons of Centor Aluminium Bifolds against the timber systems, then please do not hesitate to give us a call.